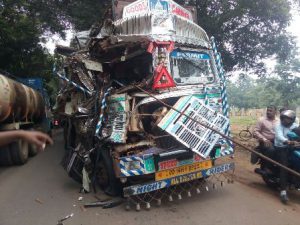 Sundargarh: Fifteen persons sustained injuries as a truck smacked head-on into a passenger bus near Biritola area under Lahunipada police limits on Saturday. Ten of the injured are stated to be in a critical condition.

The accident took place this morning while the ill-fated bus named ‘Rakesh’ was on its way to Rourkela carrying passengers from Bonai sub-division. The bus, jam-packed with commuters, was struck by a speeding 10-wheeler lorry coming from the opposite direction from the front at Biritola on NH 143 leaving 15 passengers injured at the spot.

The impact of the accident was so serious that the front portions of both the vehicles got completely mangled.

Bonai police reached the spot immediately after the accident, rushed the injured to the Bonai sub divisional hospital and seized both the vehicles.