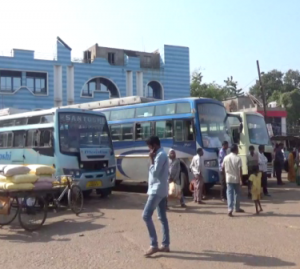 The Mayurbhanj Bus Owners’ Association resorted to disruption of passenger bus service on NH 49 between Jamashola and Keonjhar as well as on NH 18 between Baripada and Jharapokharia starting from the morning today giving a tough time to the commuters. The strikers sought immediate attention of the government and National Highway Authority of India (NHAI) towards the degrading standard of both these highways.

Informing on the indefinite strike the association’s General Secretary Sunil Das said the step was taken after neither the government nor the NHAI paid heed to their repeated appeal for restoration and repairing the highways in the area for which both the bus owners and commuters face problems.

“We resorted to an indefinite disruption of bus services after the NHAI did not turn up to our demand for NH repairing, placed a week ago. The NHs have turned into a death trap and need immediate attention”, said Das.

The association has warned to keep the buses off the roads till authorities accept their demand.