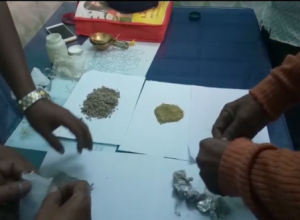 Balasore: Pointing at the flourishing illegal drug trade in the district, Balasore Excise officials today arrested a woman from Arada Bazar area and seized at least 150 gram brown sugar from her possession.

The arrested woman has been identified as Swaleha Bibi of Arada Bazar area.

Getting a tip-off on the brown sugar consignment being delivered by a drug peddler racket in the city, Excise officials led by Balasore Sadar Sub Inspector Keshab Chandra Das conducted a raid in the market area this morning. During the raid the officials took the woman into custody and seized several packets of brown sugar from her. The seized brown sugar would worth around Rs 15 lakh.

Informing on the raid Karuna Shankar Tiwari, Excise Inspector Sadar Range Balasore said the accused woman is a habitual offender and has confessed that she was selling brown sugar in the city, after bringing those from neighbouring West Bengal.

Police is investigating the matter.