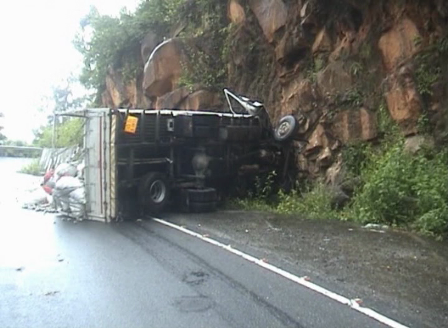 Bhanjanagar: One person died as a brinjal-laden truck overturned on the hilly road on the Kalinga Ghati bordering Kandhamal on Tuesday morning.

While the deceased happens to be the driver of the vehicle, he is yet to be identified.

According to reports, the incident occurred early in the morning today when the ill-fated truck was on its way to Bhanjanagar carrying a load of brinjals. It is suspected that the driver of the vehicle lost control over the vehicle due to some reason while taking a sharp turn on the serpentine hilly road and overturned after hitting a sidewall. Squeezed inside the mangled vehicle, the driver died on the spot.

Bhanjanagar Police, which reached the spot after getting information about the acccident, had a tough time extricating the dead body from the vehicle. Police was at the spot till this report was filed.