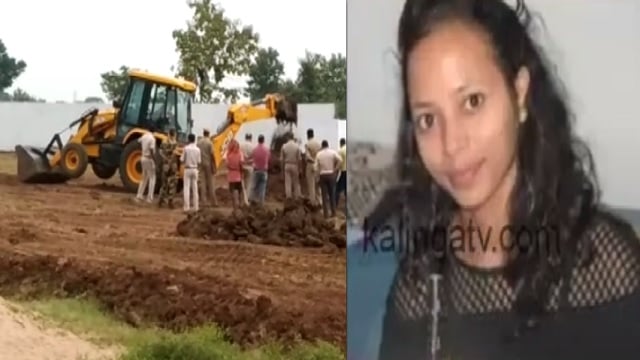 Kalahandi: A half burnt body has been found after digging up ground for an hour at the under construction mini stadium in Mahalinga. It is being suspected that the buried body is of the missing lady teacher Mamita Meher. Reportedly, Mamita’s family has been asked to arrive at the scene to identify the body. A gold chain and a bag has also been found with the body.

Reportedly, Balangir police declared the prime accused Govinda Sahu as most wanted and announced a reward of Rs 20,000 in his name.

The body will be sent for DNA test, informed Balangir police.

The mini under construction stadium in Mahalinga was sealed and one platoon police force was deployed at the spot. On Monday night, the cops questioned the operator of JCB that was parked at the stadium.

Based on the operator’s report of statement, it was believed that Mamita has been killed and buried at the under construction mini stadium.

On the other hand, a special team has been formed to nab the owner of Sunshine English Medium School Govinda Sahu who has escaped from Titlagarh barrack despite strict security. He was kept under supervision of two constables and a senior police officer. The three police officers have also been suspended by the Titlagarh SP for dereliction of duty.

His Wagon R car, bearing registration number OD 08 K 1002, has also been seized by the cops.

Horoscope for December 9, 2022: Know what the stars predict…

Congress gets majority in Himachal by winning 40 seats, BJP…