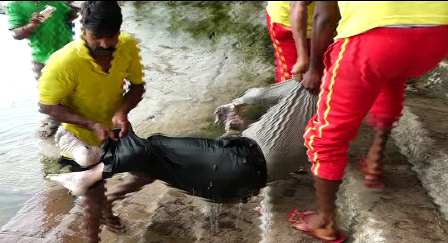 Puri: The dead body of an unidentified an aged man was found from the Narendra Pushkarini pond here on Tuesday. The incident sparked concern among the locals since the pond has great religious significance.

According to reports, some locals first spotted the dead body floating in the Narendra Pushkarini this morning and informed the Simhadwara Police about it, Police immediately swung into action and arranged for the body dressed in a full-sleeve shirt and pants, to be fished out of water with the help of some fire personnel. There were no injury marks on the body of the man, who appeared to have died a day earlier, police said.

Police has registered a case of unnatural death in the incident and is trying to find out under what circumstances the man fell into the pond and died.