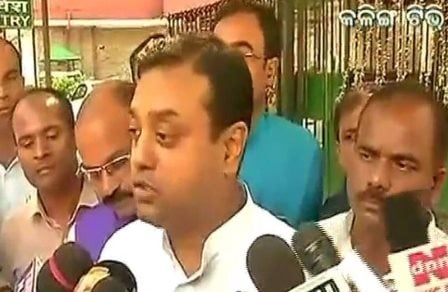 New Delhi: In a bid to take its allegation against BJD supremo and Odisha Chief Minister Naveen Patnaik over the alleged false affidavit on poll expenses to the national level, a delegation of BJP leaders on Thursday called on the Election Commission of India (ECI) and sought Patnaik’s disqualification as MLA.

The saffron party team led by National Spokesperson Sambit Patra met the ECI and reiterated its allegation of the Odisha CM giving a false affidavit to the ECI on his poll expenses. Kuchinda MLA Rabi Nayak was one of the members of the BJP delegation.

Alleging discrepancies in the figures provided by the BJD about its election expenditure, the Odisha unit of BJP on Tuesday had also moved the State Election Commission (SEC) and demanded scrapping of Naveen’s Assembly membership.

Prior to this, they had met the Income Tax Commissioner on Monday and had requested him to conduct a thorough inquiry into the BJD’s account.

The BJD has rubbished the charge.“ BJP delegates’ meeting with Election Commission of India is politically motivated. They have given false information about BJD’s bank documents. It is BJP’s attempt to defame BJD and its supremo,” countered BJD spokesperson Pratap Deb.