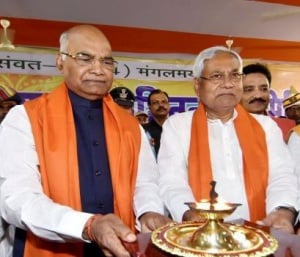 New Delhi: Putting all speculations into rest, the Bharatiya Janata Party (BJP) has finally named Bihar Governor Ram Nath Kovind as its Presidential candidate and claimed that he was chosen by consensus.

The decision was taken at the party’s Parliamentary Board meeting chaired by PM Narendra Modi and attended by BJP President Amit Shah and other senior Ministers.

It is believed that Ram Nath Kovind may also get support of many fence sitters, including JD(U) and BJD. While PM Modi is reaching out to the Opposition, Telangana CM and TRS Chief KC Rao has already extended support to Kovind.

71-year-old Ram Nath Kovind, who was born in Uttar Pradesh, was elected to Rajya Sabha twice from his home state. He is an advocate by profession. He was the President of BJP Dalit Morcha (1998-2002) and President of the All-India Koli Samaj.

Ram Nath Kovind also served as the national spokesperson of the party. He was appointed as the Governor on August 8, 2015.