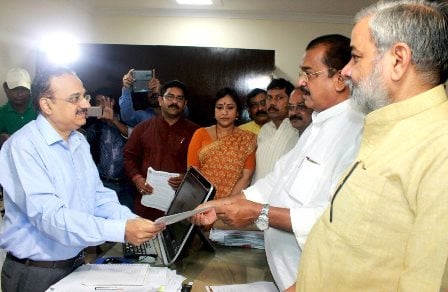 Bhubaneswar: Intensifying its attack on the ruling BJD over the alleged discrepancies in the data provided by the party about its election expenditure, the Odisha unit of BJP on Tuesday moved the State Election Commission (SEC) and demanded the scrapping of BJD supremo and Chief Minster Naveen Patnaik’s Assembly membership.

A delegation of the saffron party, under the leadership of state Vice-President Sameer Mohanty, met the SEC and submitted a memorandum seeking scrapping of Patnaik’s three-year old Assembly membership.

Notably, BJP leaders had met the Income Tax Commissioner yesterday and had requested him to conduct  a thorough inquiry into BJD’s election expenditure.

On the other hand, the state ruling party has called BJP’s allegation as political vendetta and said it will knock on the doors of the court against some leaders of the state BJP and a particular English news channel.

The dubious poll funding row, which has now become a hot topic of discussion in the state, began after a particular English news channel aired a report in this regard and the state BJP took up the issue in a big way.