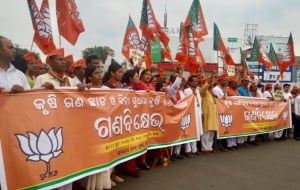 Bhubaneswar: The BJP Krushak Morcha, the farmers’ wing of the party, on Thursday staged a protest march at Master Canteen square here to press its two-point charter of demands to protect farmers’ interests.

The two demands are waiver of farmers’ loan waiver and provision of agricultural loan without interest.

National Vice President of BJP Krushak Morcha, Maheswar Sahu, who led today’s protest march, said the Odisha government has not waived farmers’ loan despite huge loss of crops suffered by farmers across the state during the last khariff season.

Sahu also pointed out that all the BJP ruled States in the country had already announced farmers’ loan waiver in their respective states. However, the Naveen Patnaik Government has not taken any steps in this regard during its 17 years of rule though there is a rise in farmers’ suicide rate in the state. “This shows the state government’s attitude towards the farmers of the state,” he claimed.

Senior BJP leader Lekhashree Samantsinghar along with prominent leaders, was present in the protest march.