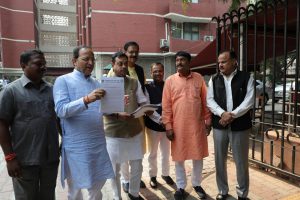 New Delhi: A BJP delegation, led by its spokesperson Sambit Patra, on Friday submitted a memorandum with the Election Commission (EC) here alleging that the office of District collector and Superintendent of Police (SP) in Bargarh may have used as the office of ruling BJD ahead of Bijepur by-poll.

Speaking to Kalinga TV, Patra said, “The SP and Collector in Bargarh district are working like BJD agents ahead of Bijepur by-poll. The government officials are visiting door to door and enquiring people whom they will cast their vote in the by-poll.”

“Work order of various developmental projects have been distributed among the BJD workers in Bijepur area without any tender or Gram Sabha”, he claimed.

Submitted a Memorandum to Election Commission on the collusion of the Administrative Officers with BJD in Odisha to mislead the electorate! pic.twitter.com/Vr1UFKcCyv

The EC has assured that  an enquiry will be carried out in the matter and appropriate action will be taken to conduct a free and fair by- poll in Bijepur, said BJP leader Kanak Vardhan Singh Deo who was also the part of the delegation.