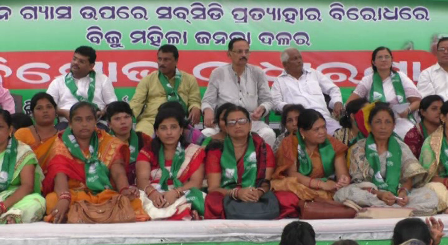 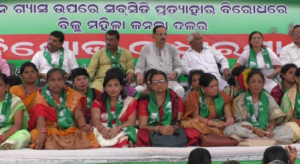 Bhadrak: Taking ahead its campaign against the Central Government decision to phase out subsidy on the cooking gas, the Biju Mahila Janata Dal (BMJD), the women’s wing of BJD, staged a protest before the Collector’s office here on Tuesday. Several leaders of the party from the district joined the protest and submitted a memorandum to the Collector addressed to President of India Ramnath Kovind.

As part of the BJD’s move to take the LPG subsidy issue to the district headquarters level, hundreds of women’s wing activists thronged the district Collectorate today morning and resorted to sloganeering against the Central Government decision. Later, a protest meet chaired by BMJD district president Bidyutlata Nayak was held there. A decision was also taken in the meeting to take the protest to the village level to make people aware of what the protesters dubbed as the BJP’s treachery with women.

Addressing the meeting, almost all the leaders were of the opinion that the ruling BJP had duped women voters by first announcing to provide them LPG connection free of cost and then phasing out the subsidy on cylinders. She claimed after the decision to withdraw subsidy, BJP’s slogan of “Swachh Indhan Behtar Jeevan” aimed at protecting woman’s honour sounds hollow now.

Talking to media on the protest meeting, Nayak said the BJD women’s wing strongly objects the subsidy withdrawal as well as hike in cooking gas price at a rate of Rs 4 per month and has submitted a memorandum addressed to the President of India seeking his intervention in this connection.