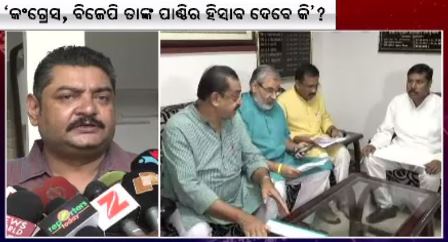 Bhubaneswar:  The ruling BJD on Monday announced it would knock on the doors of the court against some leaders of the state BJP and a particular English news channel over the dubious funding allegation leveled against the BJD.

Terming the allegation as political vendetta, BJD spokesperson and Rajya Sabha MP Pratap Deb said the bank has all the details of the transactions and IT can easily collect these details from the bank.

Quoting from a report published in ‘Business Standard’, which had said maximum illegal transactions to the tune of Rs 5000 crores have been done in the accounts of Congress and BJP, Deb pointedly asked the BJP; “Will they give the detailed information of their funds?”

‘‘The saffron party should think about itself before pointing fingers at anybody. As they say, charity begins at home,” he added.

Yestreday, BJD supremo and Odisha Chief Minister Naveen Patnaik had also threatened to take legal action in the matter. He had called the allegation ‘malicious, fabricated and false.’

An English news channel had aired an expose on BJD’s alleged dubious funding and it was repeated by the BJP Odisha unit.

On the other hand, a five-member team of the Odisha saffron party, under the leadership of Vice-President Sameer Mohanty, today moved the Income Tax Commissioner seeking a thorough inquiry into the alleged discrepancies in the data provided by the BJD about its election expenditure.