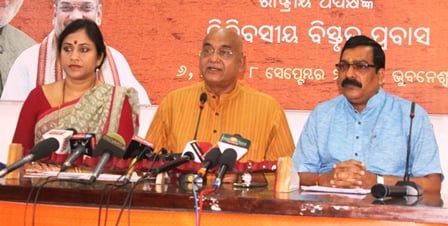 Bhubaneswar: A day after state ruling Biju Janata Dal (BJD) announced its decision to hold demonstrations across the state over the fuel price hike, the Odisha unit of BJP on Saturday termed BJD’s decision as politically motivated.

Odisha BJP Vice-President Samir Mohanty, in a press conference at the party’s state headquarters here, claimed that BJD’s decision to hold the protest in all sub-divisions of the state from Monday is a political conspiracy against Union Minister Dharmendra Pradhan.

Mohanty claimed that price of oil would come down by 20 to 25 percent only when the petroleum products are included in the Goods and Services Tax (GST). He asked Odisha Chief Minister Naveen Patnaik why he is not taking the lead and informing at the GST council meeting that the price of petroleum and diesel would come down when the petroleum products are included under GST?

Besides, he pointed out that Odisha is getting 42 percent of the total tax back, which it collects by selling petroleum products in the state, for welfare schemes in the state.

Apart from the Central tax, the Odisha government has also imposed an additional tax of 26 percent on petroleum products, which is higher than the neighbouring states like Jharkhand, Chhattisgarh and West Bengal, added the Odisha BJP Vice-President.

Notably, at a press meet yesterday, BJD had declared to hold demonstrations in all sub-divisions of the state from Monday over the steep hike in fuel (petrol & diesel) prices.

The grand-old party has decided to launch a nationwide agitation on fuel price hike next week.