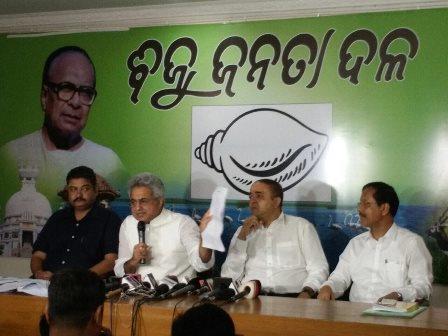 Bhubaneswar: The Biju Janata Dal (BJD) on Friday sought an unconditional apology from the BJP for what it called its ‘slanderous and malicious campaign’ against party supremo and Chief Minister Naveen Patnaik

Coming down heavily on the state BJP in a press meet, BJD MP Pinaki Mishra gave a detailed explanation on the allegation of poll irregularities levelled against Patnaik and termed the saffron party’s claim baseless.

“BJP’s allegation is baseless. It is very unfortunate and laughable that being a national party, BJP is leveling false allegation against BJD surpremo only to manipulate the people.  Therefore, BJP should tender an unconditional apology to CM Naveen Patnaik for its slanderous and malicious campaign,” said Mishra.

An aggressive BJP, on the other hand, moved the Enforcement Directorate (ED) today seeking a probe into the matter. It had earlier approached the State Election Commission and the Election Commission of India (ECI) over the allegations of poll funding irregularities in Patnaik’s Hinjili constituency in the 2014 polls.

Odisha to cover 25 lakh farmers under PMFBY this kharif