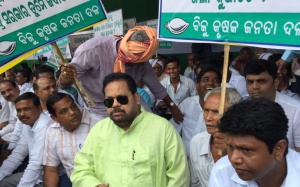 Bhubaneswar: The BJD Krushak Cell, the farmers’ wing of ruling party in Odisha, on Friday staged a two-hour-long dharna in front of Raj Bhavan, protesting against the meagre hike of 80 rupees per quintal in the Minimum Support Price (MSP) for paddy announced by the Modi Government recently.

The BJD also submitted a memorandum to the President of India Pranab Mukherjee through the Governor of the state SC Jamir, requesting him to intervene on the issue of increasing the MSP for paddy crops.

Thousands of BJD workers, including Ministers, MPs and MLAs, participated in the dharna under the leadership of Sushant Singh, President of BJD Krushak Cell,

Rout said, “PM Modi should understand that he is the Prime Minister of the nation. He should not confine himself to states ruled by the BJP. He should focus on the development of various agrarian states like Odisha.”

“In the spirit of federal democracy, the Prime Minister should initiate various developmental projects, particularly in the field of agriculture, for the development of the most backward states like ours”, he added.

Health and Family welfare Minister Pratap Jena maintained that the Narendra Modi government has betrayed the people of the country in general, and farmers in particular.

“In their election manifesto, BJP had promised to double the MSP for paddy crops. But after coming to power, the Modi government raised MSP by a meagre 80 rupees per quintal for paddy,” Jena said. “It’s an insult to the farmers of the nation.”

The Minister also pointed out central apathy towards Odisha.

“PM Modi has time to meet Bollywood actress Priyanka Chopra but no time for BJD MPs, nor the House Committee of Odisha Government for the cause of Odisha people,” Jena said.

Besides ruling BJD, the opposition Congress and BJP also geared up to address the farmers’ issue at various political platforms, aiming to garner the support of farmers in the days ahead.