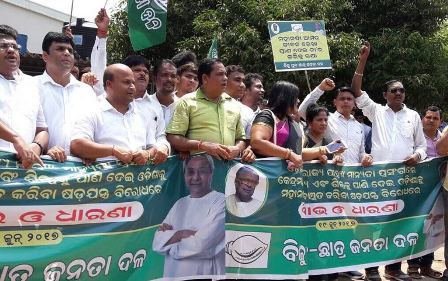 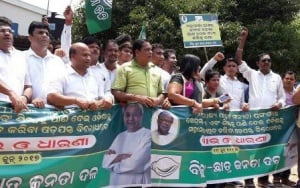 Bhubaneswar: Protesting against the recent controversial remarks of Union Minister VK Singh and Chhattisgarh Minister Amar Agrawal on the issues of special category status (SCS) to Odisha and the Mahanadi river water dispute, the youth and students’ wings of the ruling BJD held demonstrations at all district headquarters of the state, besides the capital city of Bhubaneswar on Monday.

“The remarks of the Union Minister on special category status (SCS) to Odisha and Chhattisgarh Minister Amar Agrawal on Mahanadi river water are very unfortunate. We condemn them. We have the right to get our share of water from the Mahanadi river. Besides, the BJP had said in its election manifesto for the last elections that it would work for SCS to Odisha. Therefore, we demand that the party must fulfill its promise,” said Pranab Balabantaray.

The ruling party is also slated to burn the effigy of VK Singh in Bhubaneswar.

During his recent visit to the state, Singh had rejected the longstanding demand for special category status to Odisha saying it was not necessary anymore. The tag of special category state has now become irrelevant under the changed situation as the states are now getting substantial financial assistance from the Centre for undertaking developmental activities, he had argued.

Chhattisgarh Commercial Tax and Industry Minister Amar Agrawal, during his visit to Odisha, had revealed that his government is getting funds from industrial units to construct barrages on the upper catchment of river Mahanadi to provide them adequate water for 15 years.