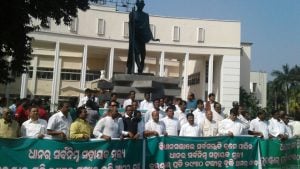 Bhubaneswar: In an interesting development on the first day of Winter Session of Odisha Legislative Assembly today, a large number of ruling BJD MLAs including some Ministers staged dharna in front of the statue of Mahatma Gandhi inside the Assembly premises seeking Union Government to hike the Minimum Support Price (MSP) for paddy crops.

Soon after the Speaker adjourned the House, the BJD legislators assembled near the Gandhi statue holding banners blaming the Modi Government for not hiking MSP for paddy crops.

“In their election manifesto, BJP had promised to double the MSP for paddy crops but after coming into power the Modi government raised meagre 80 rupees per quintal MSP for paddy,” Sahoo said. “We are demanding hike in MSP for paddy to Rs 2,930 per quintal,” he added.

The BJD, which staged a dharna over the MSP issue in front of Raj Bhavan yesterday, submitted a memorandum to President Ram Nath Kovind through the Governor demanding MSP hike for paddy crops.