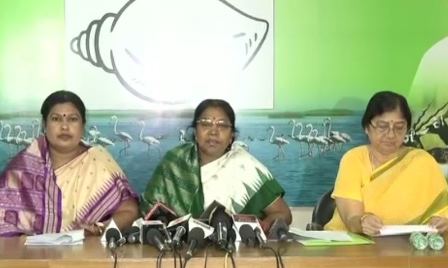 Bhubaneswar: The BJD Mahila Morcha will begin its demonstration protesting the Union Government’s decision to phase out subsidies on LPG cylinders from Friday onwards.

The women’s wing of the state ruling party, in a press meet today, alleged that the Union Government’s decision is a huge burden on the women of the county and announced an agitation from tomorrow onwards.

Later, the BJD women workers will intensify their protest by holding demonstration at all District Collectors’ offices from August 8..

“The NDA government has put posters in every petrol pump claiming that women got respect. What kind of respect they give? They have increased the price by Rs 4 per gas cylinder every month and withdrawn the LPG subsidy. It is not respect for women rather humiliation to them,” alleged Binjharpur MLA and head of BJD Mahila Morcha Pramila Mallik in the press meet.

Minister and Chikiti MLA Usha Devi, Minister and Attabira MLA Snehangini Chhuria and others were present during the press meet.