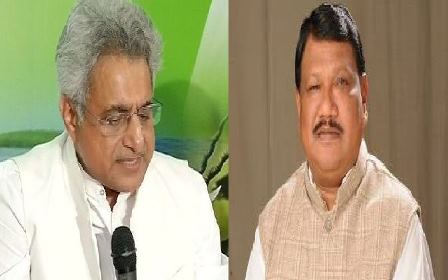 Bhubaneswar: The ruling BJD, which has been cornered by the BJP over the charge of poll funding irregularities against BJD supremo and Chief Minister Naveen Patnaik, has now sought o turn the tables by targeting Union Tribal Affairs Minister Jual Oram on the same allegation.

Alleging that Oram had produced a fake affidavit on his poll expenses before the Election Commission, BJD sought his resignation on moral grounds.

The regional party claimed that there were gross discrepancies in the affidavit on poll expenditure filed by the Union Minister before the Election Commission leaving no room for doubt that it was a false’ affidavit.

“A candidate should mention the detailed expenditure he incrurs during the election. Jual Oram on Schedule no-7 of the election expenditure statement had declared that he had not spent any money from his own pocket. However, he has stated in serial no.8 of the Schedule no-9 that he has spent Rs 19,000 and in serial no. 9 he has spent Rs 2 lakh through cheque. This apart, from serial no 12 to 14, the Union Minister said he had spent Rs 1.4 lakh. Thus he had produced a false affidavit,” alleged BJD MP Pinaki Mishra at a press meet this evening.

“BJD will knock the doors of the Election Commission against Jual Oram and he should step down from the Union Ministry of Tribal Affairs on moral grounds,” added Mishra.

Both BJP and BJD are now blaming each other over the alleged discrepancies in the poll expenses of their leaders three years after the election.