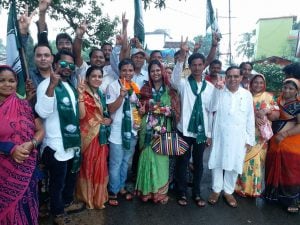 Deogarh: In a morale booster for the ruling Biju Janta Dal (BJD) in the district, party candidates clinched victory in the Deogarh Municipality by-poll for which the election was held on Friday.

After the votes were counted and results declared today, BJD candidate Ahinsa Nayak emerged victorious against his nearest rival Roshan Behera of BJP with a margin of 71 votes. Against Nayak’s 523 votes, Behera gave a good fight and bagged 452 votes.

Similarly, BJD candidate from Ward no. 9 Kulachandrama Hasti defeated his nearest contestant from BJP Rajkumar Munda with a margin of 197 votes. Against Hasti’s 582 votes, Munda got only 385 votes.