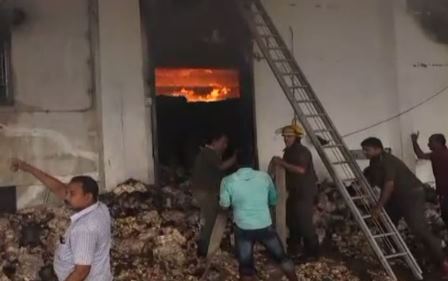 Bhubaneswar: Property worth lakhs of rupees was reduced to ashes when a major fire broke out at the Lingaraj biscuit factory near Infosys Square in Patia area of the capital city late on Sunday night.

As many as 12 fire brigades have been pressed into service to bring the blaze under control.

While the reason behind the fire is yet to be ascertained, factory officials claimed it could be due to short circuit.

“I got the news at around 3 AM about the fire and immediately called the control room and PCR. Infosys police came to the spot and started dousing the fire. Short circuit is the only possible reason behind the fire as the factory was closed due to Sunday. There were around ten tons of biscuits in  the factory,” said Pratap Satapathy, in-charge of Lingaraj biscuit factory.

The fire quickly engulfed the entire factory due to the presence of biscuits and other inflammable items such as plastic.

A JCB machine has been also deployed to clear the damaged stock of biscuits. Besides, a team of NDRF personnel has joined the fire services staff in the operation to bring the blaze under control.

The fire was still to be doused completely when this report was being written,