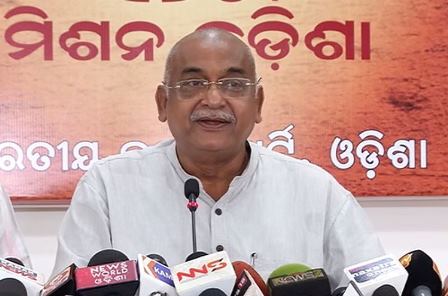 Bhubaneswar: The state unit of BJP on Monday raised questions over the 3-T formula suggested by Chief Minister Naveen Patnaik in the wake of the Biju Setu collapse incident near Jamdol Debenpalli on Jeera River in Bargarh district yesterday.

The CM had suggested three Ts, which stand for teamwork, transparency and technology, to his ministerial colleagues and officers to improve the state of governance. The BJP asked if Patnaik bats for teamwork, then everyone, from the junior officials to the Ministers of the concerned department should be held responsible and not the subordinates alone.

“Chief Minister, Ministers and all the higher officials take credit of any good result; but when anything bad happens, why the junior officials are made scapegoats? Teamwork involves both Ministers and junior government employees. Therefore, all should be held responsible for the mishap,” said Odisha BJP Vice President Samir Mohanty while addressing a press conference at the party head office here today.

Bheden police have arrested two suspended engineers of the state Rural Development department this morning in connection with the Biju Setu collapse.

Assistant Engineer Kamalakanta Taria and Junior Engineer Manoranjan Mohapatra were taken into custody. Charges under section 337 and 338 under IPC have been slapped against the duo, informed the police.

Textiles and Handlooms Minister and Attabira MLA Snehangini Chhuria visited the bridge collapse site today. She said the contractor, who had been given the tender for the construction of the bridge would also be arrested soon.