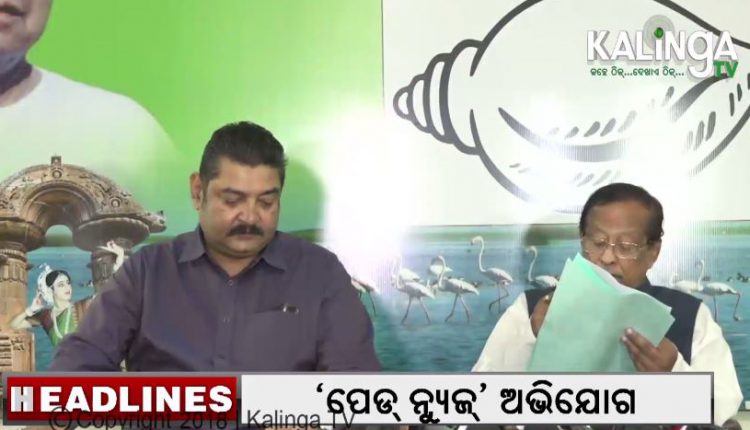 A delegation of BJD comprised of Surya Narayan Patra and Pradap Deb met Odisha Chief Electoral Officer and filed a memorandum in this regard requesting him to treat such news as ‘paid news’.

“OTV, on the pretext of news collection in the run-up to the Bijepur by-election, has actually taken up various programmes against Biju Janata Dal (BJD). Those anti-BJD programmes include panel discussions, showing photographs, carrying scrolling  below news, etc. Such an exercise is synonymous with ‘paid news’”, alleged BJD vice-president and Food Supplies & Cooperation Minister Surya Narayan Patro while briefing the newsmen at party headquarters here.

“The honourable Election Commission of India has issued a directive against such news recently. It has been directed if such ‘paid news’ are flashed, collection should be made. It ought to be treated as advertisement,” he added.

The BJD leader stated, “Hence, we have petitioned the Election Commission to direct its officials entrusted with the task of controlling media against such ‘paid news’. In a bid to make the BJP candidate victorious and defeat BJD candidate in Bijepur by-poll, the programmes being aired by OTV should be calculated how much they cost. The amount should be duly included in the election expenditure of the BJP candidate as per the norms.”

On the other hand, OTV clarified that BJD’s allegations are false and baseless. “Be it news schedules, panel discussions or news scrolls, OTV has never been partisan, rather, the merit of news forms its only yardstick of telecasting. OTV doesn’t believe in the concept of ‘paid news’. Amid the fight of political parties to prove one-upmanship, dragging OTV is condemnable. These allegations are just a means to defame the channel and an attempt in futility,” said OTV in its clarification.