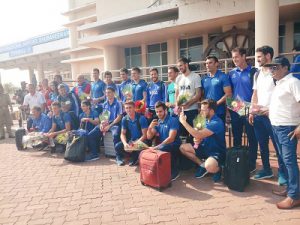 Bhubaneswar: Argentine player Gonzalo Peillat, who reached Bhubaneswar with his team on Monday, is waiting to play in a city which was his home ground during the first edition of Hockey India League.

“It’s nice to be back (in the city) where I started playing with Hockey India League. I think it is going to be a really good tournament for all the teams because this place has a lot of good fans of hockey,” said Peillat upon his arrival in Bhubaneswar.

The drag-flick expert has played for the Kalinga Lancers team during the Hockey India League.

Argentina is currently ranked world number 1 and are placed in Pool A along with Netherlands, Belgium and Spain. They will be playing their opener against Belgium on December 2.

“Everyone in the team is happy that we are ranked the best team in the world. But we have a lot to improve. It will be a step by step process,” he said.