Bhubaneswar: In a shocking incident a portion of Biju Patnaik International Airport (BPIA) caved in midnight yesterday in which at least one person was killed and several others injured.

The incident took place at around 11.30 pm in the night while the roofing was being carried out.

As per the report, the roof laying work connecting a link between the Terminal No-1 and Tearminal No-2 was underway and 25 workers had been engaged on work. As the roof came down one persons identified as a driver of the truck parked at the spot was crushed to death under the rubbles.

Teams of CISF, ODRAF, CRPF, Commissionerate Police and Fire Services Department rushed to the spot and started rescue operation to bring out the labourers trapped under the debris.

“Flight services have not been affected due to the incident as the building was a linking one between the old and the new terminal. All domestic and international flights are running smoothly. A probe will be conducted into the mishap soon to ascertain why this has happened,” said Varun Venkateswar Rao, Director, Biju Patnaik International Airport.

While talking to media over the incident, SRC and OSDMA, Odisha Pradeep Jena said, all the workers trapped under the debris were rescued soon after the collapsing of the newly constructed structure and two to three hours were taken to accomplish the task. 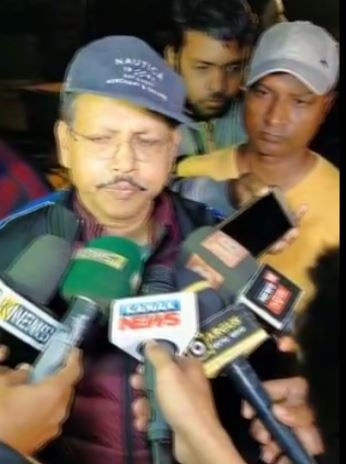 Along with the SRC, MLA Anant Narayan Jena reached the spot of late and supervised the rescue operation.

The matter will be investigated and stringent action will be taken against those responsible for the collapse, assured the SRC.