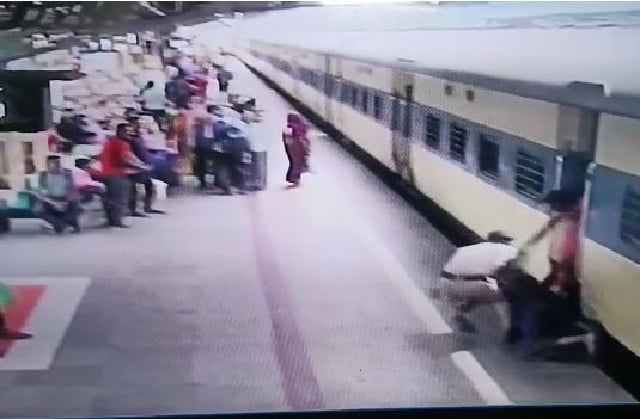 Bhubaneswar: Two women miraculously escaped death after falling under a moving train at the Bhubaneswar Railway station in the capital city of Odisha on Wednesday. Thankfully, a RPF jawan swung into action within a blink of an eye and rescued the two women.

The RPF Jawan has been identified as Sanatan Sethy.

As per reports, two women had travelled from Icchapuram to Bhubaneswar along with their two sons in the Palasa Cuttack passenger train today morning. When the train was at the platform number 3 of Bhubaneswar railway station they were trying to get down from the train when it had started to run. At this juncture one of the women slipped off the train and was getting dragged towards the wheel under the train.

With no time a RPF jawan who was on duty at this platform saved them. And the two women narrowly escaped death.

We can see in the video that the RPF jawan is doing his duty while he is noting down something in his writing pad. Meanwhile the women were seen trying to get down off the train when the jawan pulled them on to the platform.

The whole incident has been caged in the CCTV installed at the Bhubaneswar railway station.

As per reports a bravery award will be bestowed on the said RPF jawan for his noble work that he did today and saved lives of two women.

Also read: You might not have seen such a rare snake: Watch