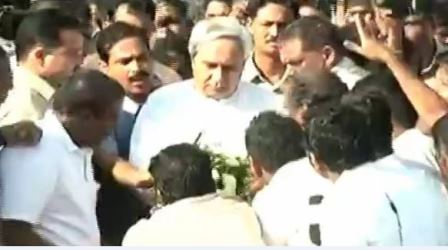 Bhubaneswar: Odisha Chief Minister Naveen Patnaik, who won the Best Administrator Award on Friday, got a grand welcome on his return to the state from Delhi on Sunday afternoon.

It was a historic moment as the route from the Biju Patnaik International Airport to Patnaik’s residence Naveen Nivas witnessed a sea of party workers.

Raising slogans hailing him, the enthusiastic party activists greeted the BJD supremo with bouquets and placards giving a herculean task for the Commissionerate police and traffic police to make way for the CM’s carcade.

Naveen was presented with the Best Administrator Award by former President Pranab Mukherjee at the Outlook Speakout Awards in New Delhi on Friday after he scored more votes than his competitors.