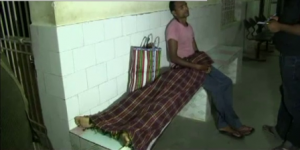 Balasore: Panic gripped Balasore District Headquarters Hospital (DHH) on Friday after a child from Badiagadia village of Baliapala block in the district died of Dengue at the Special Isolation Ward. With the death of the child, the district has reported the first Dengue death of the year.

The deceased child has been identified as Sushant Barik.

Sushant, who fell sick on Monday and was detected with Dengue subsequently, was rushed to the Balasore DHH in a critical condition on Wednesday and was lodged in the Special Isolation Ward. However, his condition deteriorated on Friday.

Following the first death report from the district, local MP Rabindra Jena and Chief District Medical Officer (CDMO), Balasore Vivekanand Das visited the DHH and took stock of the situation. Assuring the patients at the hospital, the duo informed that all steps are being taken to put a check on the spread of the disease.

“A team of doctors has been rushed to the hospital following the death report and it is taking care of the situation. Furthermore, I have also talked to the state health minister Pratap Jena on the issue. He has sent a medical team from SCB in Cuttack to the district. It would reach by tomorrow,” said the MP.

“Areas like Baliapala, Basta and Gopalpur are the worst affected areas as far as the Dengue is concerned. Around 36 patients have been found positive with the vector-borne fever from these areas alone. Daily visits by the health official teams are being conducted to these areas and awareness campaigns are being undertaken side by side,” informed the CDMO.