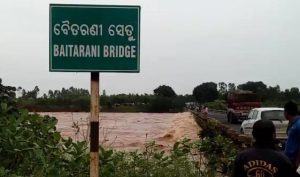 Bhadrak: In the wake of persistent rainfall in the upper catchment area, the water level in Baitarani River on Tuesday crossed the danger level near Akhuapada in Bhadrak district in Odisha.

The district will get more rains in the next 24 hours due to a low pressure in the Bay of Bengal, according to the Met Department.

Officials said the water level in Baitarani near Akhuapada has crossed the danger mark of 17.83 metre and had reached 18.40 metre by 6 am this morning. On Monday, it was 18.10 metres. The river, however, is flowing at 37.60 metres against the danger level of 38.36 metres near Anandpur, showing a falling trend.

The Chief Minister asked the district administration to stay prepared to face any eventuality. Field officials have been directed to remain present in their respective areas and leaves of Government employees have been cancelled.

People in low lying areas have been evacuated to safer place. Adequate number of Disaster Response Forces of ODRAF, NDRF, and Fire Services have also been deployed in the district.