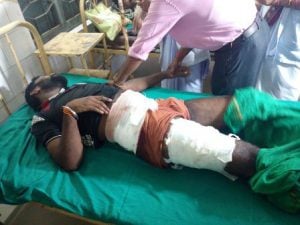 Kendrapara: In yet another incident that speaks volumes about the deteriorating law and order situation in the district, two unidentified bike-borne miscreants shot at an auto rickshaw driver at Khadianga Square on Kendrapara Hospital Road and drove away on Friday morning. The victim sustained critical bullet injuries on his leg and waist in the attack.

The victim has been identified as Rajendra Patro alias Niki of Garapur area.

According to reports, Rajendra was returning from the Kendrapara District Headquarters Hospital (DHH) on his auto rickshaw at around 9 o’clock in the morning today when two bike-borne youths chased him from a distance on the Hospital Road. After intercepting Rajendra near Ankur School, they first resorted to verbal abuse and then fired two rounds of bullets at him. While one bullet pierced into the victim’s right thigh, another struck his waist. The attackers immediately fled from the spot following the incident.

Kendrapara Town Police reached the spot following the incident and rushed the victim to Kendrapara DHH. He was later shifted to SCB in Cuttack as his condition deteriorated.

While the reason behind the attack is yet to be ascertained, police suspects it to be a fallout of past enmity.

“Police has recovered two empty cartridges of bullets from the spot and suspects it to be a fallout of past enmity. However, an investigation is underway and everything would come clear in a couple of days,” said Bijay Kumar Bishi, IIC, Kendrapara Town Police Station.

On the other hand, the victim ruled out the possibility of past enmity with anybody and said he could not identify the  attackers as they were wearing masks at the time of attack.