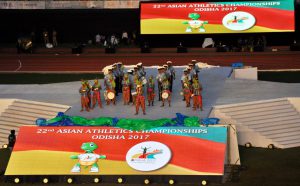 Bhubaneswar: Odisha is all geared up to host the 22nd Asian Athletics Championships, to be inaugurated at Kalinga Stadium in the state capital Bhubaneswar this evening.

Chief Minister Naveen Patnaik, Union Ministers and other dignitaries will attend the inaugural ceremony of the Athletics Championships. However, Union Sports Minister Vijay Goel, who was scheduled to inaugurate the continental sports event, would not attend the programme due to ill health.

“Olly”, the mascot for the tournament represents the endangered Olive Ridley sea turtles that arrive in millions every year at Rushikulya and Gahirmatha beaches in the state for their annual nesting.

More than 1,200 athletes, 20 of them world champions, and officials from 45 countries in Asia will witness what is going to the largest sporting event ever organised in Odisha. As many as 42 track and field events, 21 each for men and women, will be held in the championship. The winners will get a direct entry into the World Championship to be held in London staring from August 4 to August 13.

International Association of Athletic Federation (IAAF) President Sebastian Coe paid a courtesy visit to Chief Minister Naveen Patnaik here at Naveen Niwas on Tuesday. He appreciated the immaculate preparations made by the Government of Odisha for the mega event with just 90 days of notice before the start of the tournament.

Within this short period, the multipurpose Kalinga Stadium has been transformed into a world-class track and field facility adhering to the norms of the IAAF. It now has Olympic-level synthetic track, state-of-the-art lighting systems, practice ground and tracks as well as spectator arrangements.

The opening ceremony will be a cultural extravaganza. The programme is designed to display the glorious past of the state in terms of culture and heritage, its Buddhist connection with other countries and the current time of modernism. The Prince Dance Group and the Odisha Dance Academy will present their programmes while artists from other countries will also perform.

This is the third time that the tournament will be held in India. It has been previously hosted by New Delhi in 1989 and Pune in 2013.

4 more sheep killed in Niali, killers yet to be identified