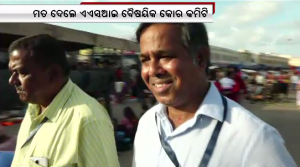 Puri: The technical core committee of Archaeological Survey of India (ASI), which visited the Sri Jagannath Temple here on Thursday, expressed satisfaction over the repair work undertaken inside the Jagmohan, the hall facing the sanctum sanctorum.

The committee headed by chairman Anandpran Gupta arrived at the temple premises this morning and took stock of the undergoing Jagmohan repair work which is in its final stage. Srimandir technical committee member Dharmapada Mishra assisted Gupta in the inspection.

“We came to examine what work has been done and this was to our satisfaction. The work has been done very well. The next step is the outside work of the Jagmohan. Some work remains to be done outside,” informed Gupta after the visit.

Core committee member Dharmapada Mishra said the ASI team today inspected the Natamandap, Jay Bijay and Beharan gates of Srimandir also for which the repair work would be undertaken at a later stage.

A high-level meeting of the ASI technical core committee would be held at Bhubaneswar today in which the members would review the overall repair work at Srimandir. The meeting is also expected to take up the budget for the repair of Natamandap, Jay Bijay and Beharan gate, which has been recommended by the committee to the ASI.