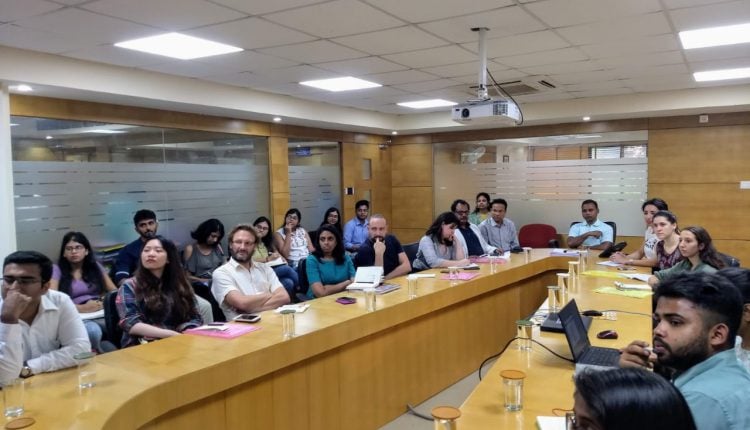 Bhubaneswar: A workshop on “Role of heritage in urban development of Bhubaneswar’’ for 27 visiting students and faculty members of Indo-Franco-German team from National School of Architecture, Strasbourg in France, Faculty of Architecture of the Karlsruhe Institute of Technology, Germany, Kamla Raheja Vidyanidhi Institute for Architecture and Environmental Studies, Mumbai was held in Bhubaneswar Development Authority building today.

Organised jointly by KIIT School of Architecture and Planning, Heritage Cell of BDA, Bhubaneswar Urban Knowledge Centre and French Embassy, the workshop discussed various heritage aspects of the Old Town area of the city, which is dotted with 361 beautiful monuments and how the conservation and other plans are being taken up by the development authority.

Vice-Chairman BDA Prem Chandra Chaudhary spoke and advised the participating architecture students to understand the heritage potential of the Old Town area and give their frank opinion regarding its development and help in the planning process for BDA.

The Faculty and Students of French and German Universities are associated in the project to study “Role of Heritage in the Smart City and urban development of the cities of Bhubaneswar and Chandigarh.’’

Since 2015, the Indian Government has launched a national program to support 100 Indian cities to become “Smart Cities” following a model of sustainable and exemplary urban development. French and German expertise have been solicited in this context and the two countries are accompanying several Indian cities in this process.

Chandigarh, a city designed by Le Corbusier, is followed by French expertise whereas Bhubaneswar, the millennial city of Orissa whose modern part was designed by German architect Otto Königsberger, benefits from German expertise. These two cities have the distinction of having both a rich cultural heritage and whose preservation and enhancement are an integral part of the Smart City development plan.

`Integral part of the city, heritage offers the opportunity to question, through our reading of the past, the complexity of contemporary societies as the collective choices to operate today. Thus, the project we propose focuses on how heritage is integrated into the smart city development plans of Indian cities,’’ said Director KIIT School of Architecture and Planning Professor Ray.

Germany and France are highly involved in the national Smart Cities program. There is a proposal to set up an Indo-Franco-German program allowing students from the three countries to carry out a detailed study of Bhubaneswar and Chandigarh, in order to assess the place of heritage in the development plans of the urban areas of these cities in future.

The final phase of the workshop will be in New Delhi in March will involve a joint presentation to Government of India to give a proposal for the cities.

Objective of today’s workshop was to help Bhubaneswar rebuild its distinctive identity by weaving the contemporary with the historical by assessing the role of tangible and intangible heritage in the Development Plans of Bhubaneswar City, identifying the strengths and weakness of present plans and projects, finding measures to weave contemporary trends and aspirations with contextual strategies and making recommendations to local governments and Smart City Experts by developing a rooted contemporary idiom.

Students and faculty members from the three institutes from outside the State and KIIT School of Architecture and Planning also took part in a mock hearing session in which they discussed urban intervention within a heritage area and discussed its impacts.