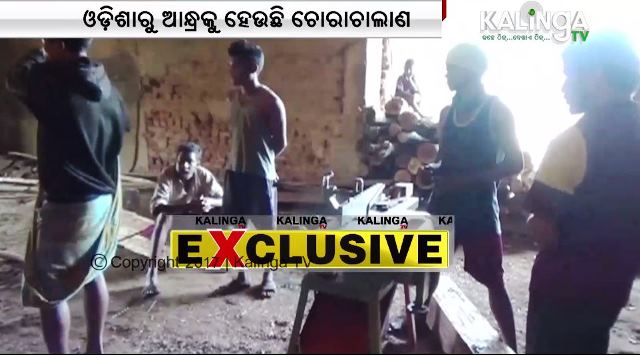 Malkangiri: Odisha government is spending crores of rupees to create awareness among the people to stop deforestation and create new forests in the Maoist-hit Malkangiri district. It has also engaged the forest officials and some NGOs for preservation of the forests in the district. However, in an exclusive ground zero report, Kalinga TV found that the state government’s decision remains only in pen and paper.

As per Kalinga TV reports, wood mafias from neighbouring Andhra Pradesh (AP) are running wood racket and that too from a godown of Odisha government in Ralegada Panchayat of cut-off area of Chitrakonda block. Ironically, the district administration including the forest officials are clueless about the racket.

The wood smugglers of Andhra Pradesh have engaged some villagers who chop huge number of trees including many valuable trees like Dalbergia sissoo, Sal and Piasal in broad day light every day. They have chosen Odisha government’s godown as safety place for their business where they make different furniture and smuggle to their states.

“We chop many trees including Sal and Piasal during the day and carry to the Government-run-godown. We get Rs 2000 to chop a log. The forest officials are unaware of the smuggling,” said a local wood mafia.

The wood smuggling has created resentment among the intellectuals of the district. They alleged that the forest personnel do not take any action citing Maoist risk despite repeated complaints in this regard.

“The forest department keeps mum over the issue giving excuse of the Maoist threat in the cut-off area. If the forest officials and district administration do not take action this regard soon, we will lose valuable trees,” said Sudhakar Das, an intellectual.