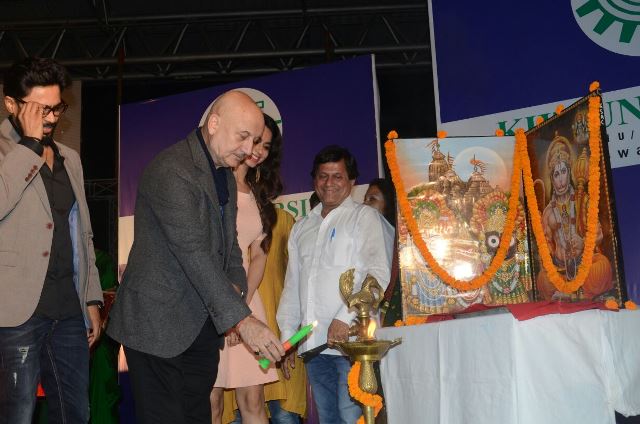 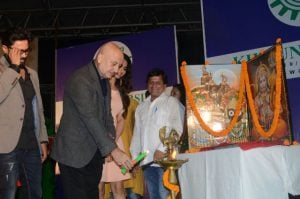 Speaking on the occasion, Kher said, “Small town people dream, while big town people target their life…But I believe, with sincere work and discipline in life one can fulfill the dream.”

“Being a small town boy of Shimla I also had a dream about a better life, though I had not secured more than 38 per cent marks throughout my academic career till I joined the Drama School. I was not good at studies, or in sports, but I had the luxury of watching cinemas in Shimla,” he stated.

“Whether Dev Anand’s  Hum Dono or  Raj Kapoor’s Shree 420 or Manoj Kumar’s Upkar …every film gave me a moment of magic and I wanted to be part of that magic,”  he opined.

The actor also recalled how the movies helped him to understand the depth of learning things and acquired 80 percent of marks in drama school exam.

The actor also narrated how his desire of learning helpd him to sustain in the field of acting.

“You can survive in this profession for 33 years and over 500 films only if you can learn acting or the craft of acting. My arrogance comes out of my understanding of my art. I have gone through good times, bad times and strange times but I knew that I had knowledge. The knowledge I had acquired in my drama schools,” said Anupam.

Going down the memory lane and remembering the struggling period of his career the veteran actor said, “I reached Mumbai with only Rs 37 in my pocket. But I had unlimited dreams. Dreams of seeing my name on Billboards and on castings. For 3 long years I had no work, I had to spend my time on railway platforms and sea beaches. I was compelled to borrow money from friends. Then, I wrote a letter to my grandfather saying  him that I want to leave Mumbai, the city of dreams. Then he replied with a letter to me and a line in that letter changed my life. He wrote, Bheega Hua Aadmi Baarish Se Nahin Darta. He advised me to stay back as my parents had spent a lot of money on my drama school training”.

I got my first film ‘Saaransh’ at the age of 28 and played the character of a 65-year-old man. That film not only gave me the first break in Bollywood but also the identity for what I am today. After Saaransh I was invited to almost every function and got my first Filmfare Award as ‘Best Actor’ and felt that ‘All Dreams Come True’.

“What an amazing thing to be here among 27,000 students of KISS here today. This experience can’t be matched with anything in the world. I suggest all students sitting here to never give up dreaming,” he observed.

“I will carry the memory of the 3rd Kalinga International Film Festival as a very amazing memory with me,” he stated.

Popular film ‘Ranchi Diaries’ will be screened this evening followed by an interaction session with Kher.Other films including Chloe from France, Jackpot from Vietnam and Indian films including Bakul, Onyo Poalaa, A World Within Four Walls, Upahar, Roadside Scientists, Ardhonariswar, The Machine, Teorm Kite, Pounopunik, Statement After My Poet Husband’s Death, Alone, Call Girl, Bahurupi, I Am Sorry, Ishara will be screened during this three-day festival.