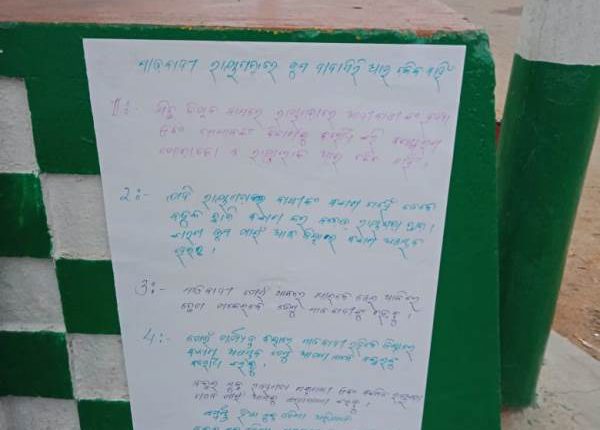 Rayagada: Anti-Maoist posters slamming Red-rebels’ anti-development stand and oppression of innocent tribal in the name of revolt surfaced at several places in Bissam Cuttack area of Rayagada district on Wednesday.

The incident came to light after some locals came across a poster put up on the Bissam Cuttack grampanchayat office and informed police. Later, similar posters were also found on roadside walls at three more places.

The poster put up on the wall of Bissam Cuttack grampanchayat office and released anonymously was seen issuing a warning to Maoists against misguiding tribal people to join their so called revolt, by dubbing it as ‘fake’ and ‘falsified’. The poster bearing messages written in green and black ink pledged for a Naxal-free and developed Rayagada district and dubbed Maoists as detrimental in achieving these goals.

The issuers of the posters have also appealed people in Rayagada district to boycott Maoists and their ideology if they really want to safeguard their interests.

Police have seized the posters and started investigation into the incident.