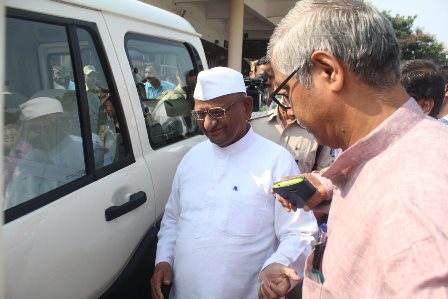 Bhubaneswar: Famous Social activist Anna Hazare, who arrived here yesterday on a three-day visit to the state, will address a Jai Kishan Samavesh in Jagatsinghpur on Thursday.

Anna, who had a night halt in the State Guest House yesterday, headed towards Jagatsinghpur in a huge bike and car rally to attend the Jai Kishan Samavesh and the state-level former CM Nabakrushna Choudhury’s Jayanti.

Thousands of farmers from the state and outside the state will attend the farmers’ conclave organised by the Navnirman Krishak Sangathan (NKS).

While addressing a press conference yesterday in Bhubaneswar, the social activist came down heavily on the Union government and demanded pride, prestige and pension for the peasants. Besides, he threatened to sit on dharna in New Delhi.