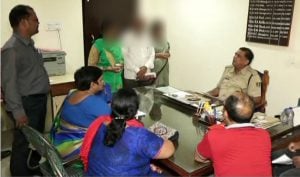 Cuttack: in a bizarre incident, a female home guard on Friday lodged a police complaint against her neighbour Pradipta Das for allegedly circulating a fake obscene video featuring her on social media.

The home guard, along with her family, today called on the Cuttack SP (Rural) seeking justice and demanded action against the miscreant.

In her complaint, the female cop stated that her father built a toilet under a government scheme and had to get a bill passed to  receive money from Sompur Panchayat. Her neighbour Das, who happens to be the husband of local Panchayat Samiti Member, asked for some bribe to get the bill passed in the Panchayat.

Her father, however, rejected Das’ demand outright and threatened to approach higher authorities in this regard, she stated.

Miffed by the rejection, Das made a fake obscene video involving her, she alleged.

The home guard also maintained that the woman seen in the obscene video was not she. She said she was being maligned by Das.

Police said, “It is a very sensitive matter; the investigation is going on and the culprit will be caught as soon as possible.”