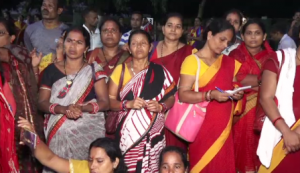 Bhubaneswar: In a big respite to government, the striking Anganwadi workers called off their 40-day long agitation following a talk with the state women and child development minister Prafulla Samal on Saturday evening.

The All Odisha Anganwadi Ladies Workers’ Association which had earlier defied Samal’s warning of action and had decided to continue with the agitation till the fulfillment of their 13 point charter of demands, announced to join work from Monday.

Expressing his happiness soon after the association shun its strike, Samal said there was a difference between the government and the workers over certain issues which had been sorted out.

While four of the five Anganwadi associations had called off their strike after the announcement, the All Odisha Anganwadi Ladies Workers’ Association affiliated to Bharatiya Mazdoor Sangha, continued with its cease work agitation at Lower PMG Square in the city.