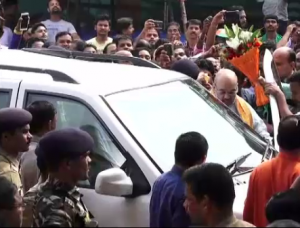 Bhubaneswar: BJP national president Amit Shah, who is in Odisha currently to fire up the party workers to achieve the 120 target which the saffron party has set for itself in the 2019 Assembly polls, visited Lord Lingaraj Temple here in the morning and paid his obeisance.

Shah, who arrived at the 12th century shrine this morning accompanied by Union Petroleum and Natural Gas (PNG) minister Dharmendra Pradhan and party’s Odisha chief Basant Panda, was welcomed by BJP workers in a grand fashion on reaching the temple. Party workers were seen performing traditional songs and dance to welcome Shah into the temple. Later, Shah had darshan of the deity and performed puja inside the temple.

Notably, the BJP president would leave for party office in the city from the Lingaraj Temple and hold a press conference there in the afternoon. Later he would address party workers on effective media management during a workshop held there.

Shah, who is on a three-day visit to the state, would address a massive workers’ gathering at the Janta Maidan here on the final day tomorrow.