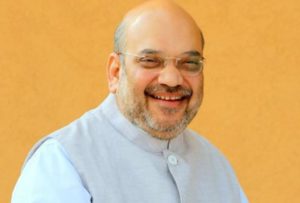 Bhubaneswar: BJP President Amit Shah will arrive here today to discuss with party workers how to achieve ‘Mission 120’ – winning 120 out of the Assembly seats – in Odisha in the 2019 elections. With his three-day visit to the state, Shah will start his 110-day nationwide tour to strengthen the saffron party across the country.

The BJP Chief is scheduled to arrive at the Biju Patnaik International Airport here at 1.10 pm today. He will hold meetings with party leaders and activists, including party MPs and MLAs, in phases at the State party headquarters in the afternoon.

In the evening, Shah is scheduled to meet a group of intellectuals in a private hotel in the capital city.

On Thursday, the saffron leader will visit the Lord Lingaraj Temple at 8.30 am. He will then hold a press conference, after which a meeting will be held with the State Media IT, social media and the election management committees.

On the third and final day of his visit, the BJP President will address a karyakarta maha-adhiveshan or workers’ mega congregation at Janata Maidan.

Challenging Chief Minister Naveen Patnaik’s four consecutive tenures in Odisha, Shah had announced during his last visit to the state in July that the BJP would form the government in the state in 2019 by winning as many as 120 MLA seats out of total 147 assembly segments,.

The BJP has been making significant progress in the state since 2014. Earlier this year, it registered an impressive result in Panchayat polls, winning 306 of the 853 zilla parishad seats across the state, as compared to just 36 in  the 2012 polls.