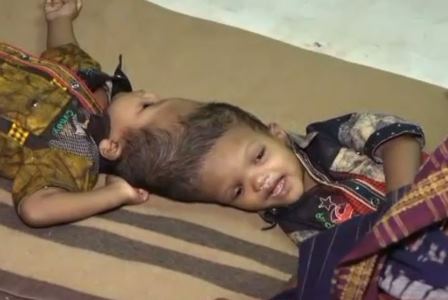 Bhubaneswar: A specialist from United States of America (USA) will conduct the second phase surgery on conjoined twins from Kandhamal Jaga and Balia after two months at AIIMS, New Delhi.

Informing about this, Odisha Health Minister Pratap Jena, who has kept a close vigil on the twins, said that the first phase surgery of the conjoined twins was completed successfully yesterday.

The 20-hour first phase operation began at 9 AM yesterday and concluded at 6 AM today.

“The first round of operation of the conjoined twins was successful. They have been kept on ventilator and their condition is stable. The next phase operation will be done after two months,” informed AIIMS neurosurgery department head Prof Ashok Mohapatra, who is from Odisha and leads the 40-member doctors’ team that includes experts from Japan.

Chief Minister Naveen Patnaik had sanctioned Rs 1 Crore from the CM’s Relief Fund for the surgery on the conjoined twins. Odisha Health Minister Pratap Jena also personally met the twins and their parents during his visit to the National Capital City on July 29.

Kalinga TV had highlighted the sufferings of the conjoined twins of Milipada village under Phiringia block in Kandhamal district in November 2016 and then on June 7, 2017 on Kalinga Bandhu programme. Later, other media houses took up the case.

Jaga and Balia had left the state on July 13 along with their parents – Pushpanjali Kanhara and Bhuiya Kanhara.

A representative of the Kandhamal district administration, National Youth Health Programme Assistant Manager Soumya Samantaray, an Ayush doctor and two volunteers had accompanied them. Since then, the twins are under observation of AIIMS doctors.