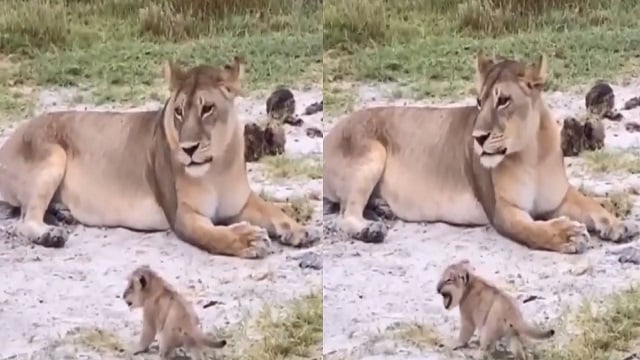 Without a doubt, the animal kingdom is full of exciting things. On the Internet, there are several crazy and cute videos of these incredible creatures. The adorable shenanigans of these wild beings never fail to bring a smile to the faces of netizens who watch them. No one wants to miss out on such videos because they provide entertainment and joy.

In light of it, a video of a lion cub learning to roar while playing with his mother has resurfaced on social media. The now-viral clip is far too adorable to miss.

The video was previously shared on Twitter by the page ‘Buitengebieden,’ which shares cute and funny animal videos on a regular basis. It had garnered nearly 200k views and over 20k likes when it was posted a month ago.

After the video went viral, it was reposted by a number of other similar pages, including ‘Feel Good Post,’ which posts wholesome and cute videos of animals doing silly things on a regular basis. The video shows a lion cub attempting to roar but instead letting out the cutest ‘meow’ ever. Meanwhile, the lioness is simply babysitting him as he roams around her, trying his best to roar.

Wild animals are always good in the forest, this viral video…

The caption in the post reads, “A mighty roar is in progress.”

A mighty roar in progress.. 😊 pic.twitter.com/dAT3aVPG79