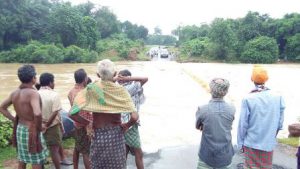 Baripada: Communication line was cut-off between Baripada and Udala Sub Divisions of Mayurbhaj district since Friday morning after Adapala temporary bridge over Deo River got submerged under rainwater.

The situation was caused by incessant rainfall which hit the district since last 24 hours triggering water level to rise in the Deo River. While no report of river water ingress into the villages have been received so far, the district administration has started preparations to move villagers in Adapala and Sunapala village to safer places in case of any eventuality.

On the other hand, locals have held the district administration responsible for the situation and claimed that due to the inordinate delay in construction of a permanent bridge over Deo River they are facing problem. The construction work of the new bridge, which was started in 2015, is yet to be completed.

River water was flowing at a height of 2 feet above the Adapala bridge till this report was being filed.