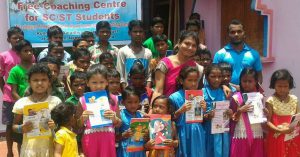 Jharigam: With the aim of bringing about an improvement in the academic performance of SC & ST students, Aaradhya Charitable Trust has opened a coaching centre for them free of cost at Jharigam block headquarters in Nabarangpur district in Odisha on Sunday.

The Bhubaneswar based Trust also distributed study materials to the financially backward students from SC & ST communities. Over 40 students of Jharigam area were present on the inaugural day of the coaching centre.

Talking to Kalinga TV Secretary of the Aaradhya Charitable Trust Sagarika Satapathy said, “Our Trust had taken this initiative to help the financially backward students from SC & ST communities in Nabarangpur district in their studies”.

“Though the students are admitted in different schools, they are unable to study at home due to various reasons, for which their doubts on various subjects remain uncleared. Our Trust will help such students to garner more knowledge and make their studies easier.”

The first of its kind initiative taken by the Trust in the tribal dominated area was appreciated by one and all in the region.