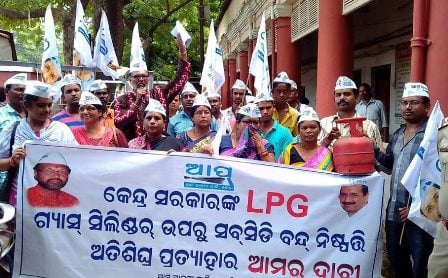 Bhubaneswar: The Odisha unit of Aam Aadmi Party (AAP) on Thursday held demonstrations across the state against Union Government’s decision to phase out subsidy on LPG.

Hundreds of party workers gathered at different places of the state and shouted slogans against the the Modi-government for what they called its anti-people move.

They condemned the statement of Natural Gas and Petroleum Minister Dharmendra Pradhan’s statement, who has claimed that it was the UPA government had taken the decision earlier.

In Bhubaneswar too, hundreds of party workers and leaders under the leadership of state Convenor  Nishikant Mohapatra and State Secretary Nandlal Singh gathered at the Lower PMG and held a demonstration.

The protesters questioned the Union Government’s decision asking why the Union government had increased the price of LPG gas cylinder by Rs 4 every month at a time when oil price is low in the international market. It is only to harass the poor people of the country, they maintained.