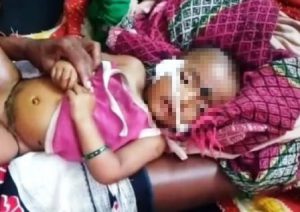 Nabarangpur: In yet another shocking incident bringing to fore the unscientific medical practices still prevalent in the remote patches of Odisha, a seven-month-old tribal girl turned critical after being branded with hot iron to cure her of a stomach ailment.

Reports say the infant from the Phupu village under Nandahandi block in the district developed bloated belly syndrome on Friday night. But the parents of the child preferred to get her branded with hot iron on her belly rather than consult a doctor. The girl turned critical after she was given as many as 18 strokes of iron branding on her stomach.

The ill-fated child was rushed to the UIP Hospital in Khatiguda this morning where she was put under ventilator due to breathing problems.