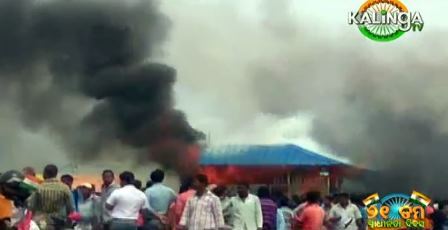 Bhadrak:  At least seven labourers are feared dead in a mishap during coal loading at Dhamra Port in Bhadrak district on Tuesday. Several other workers are also believed to have been trapped under mounds of coal.

According to reports, the mishap took place at around 12 PM when a group of labourers was loading coal in the premises of the Port.

Irate over the mishap, the labourers went on a rampage and set fire at four places including the main gate of the port. They also allegedly attacked the Chief Executive Officer (CEO) Subrat Tripathy and five other officials of the port.

On being informed, one platoon of local police and fire fighters rushed to the spot. But they are yet to take control of the situation as they are outnumbered by the labourers.

Sources said six platoons of police forces have been rushed to the port from the district headquarters town to carry out the rescue operation.