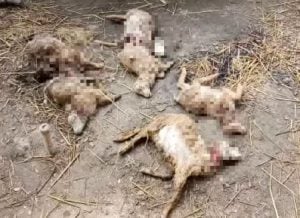 Rajnagar: After Niali, the fear of mystery animal killing sheep has reached Rajnagar block of Kendrapara, following the recovery of six sheep carcasses from a local’s cattle shed in Rajagada village on Friday.

One Malati Satpathy of the village came to know of the sheep deaths in her cattle shed during an inspection of it this morning. All the sheep were found with deep injury marks on their neck areas, pointing at the mystery animal attack. The modus operandi of the predator remained very similar to the Niali sheep killings with pugmarks and nail indentations all over the cattle shed.

“The predator attack might have taken place late in the night as we had guarded the shed till 2 AM last night,” said Malati. “We had lost 3 sheep to the mystery animal attack on Wednesday night in a similar fashion and took the decision,” she added.

Meanwhile, the forest officials along with veterinary doctors have reached the spot and examined the carcasses.